Showing posts from September, 2016
Show all

The Wicked Will Rise (Dorothy Must Die Series 2) 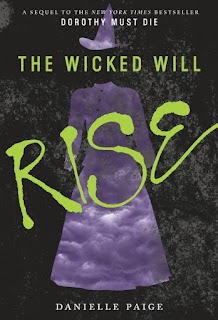 The Wicked Will Rise By Danielle Paige   There’s a new girl from Kansas in OZ…   And she has a mission:   FIND Dorothy.   DESTROY the road of Yellow Brick.   SAVE her home.   THE WICKED WILL RISE.   This book, this book!!!!!!! It’s brilliant!!!!! I haven’t expected this book to be “THAT” GOOD!!!! Damn! It’s so great!!!!! I love it, especially the last part of the book! I just can’t stop myself from devouring the entire book! That’s so brilliant! It’s ripping my heart out!!! I need Yellow Brick War NOW!!!! (Oh wait…in fact…I stop for a while to read and it takes all of my will to stop myself keep reading!!!)     My name is Amy Gumm—   And I’m the other girl from Kansas.   After a tornado swept through my trailer park, I ended up in Oz.   But it wasn’t like the Oz I knew from books and movies. Dorothy had returned, and she was stealing magic from the land. The Wizard was back. Glinda could no longer be called the Good Witch. A
Post a Comment
Read more 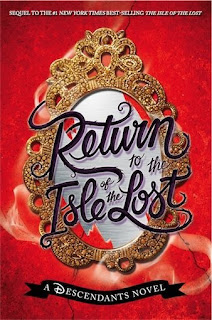 Return to the Isle of the Lost By Melissa De La Cruz   Home Sweet Home.   Oh finally, I’m reading this book. FINALLY!!!!! I’ve waited to read this for ages!!!! But the wait is worth it, because I love Barnes and Noble Exclusive edition. I just love them. They’ve always got some cute little surprise for readers or some extra scenes. LOVE IT. Now…Return to the Isle of the Lost…in fact, it has been a long time since the last time I read The Isle of the Lost. And…I don’t think I get the time to reread it before…I was so busy then and now I’ve got tons of books to read. But, since it’s a Disney novel, I still remember the scenes pretty well and the movie as well!!! Oh wait! I think the sequel movie is about to come out as well!!!! (Just who can tell me how to watch it now since my favorite site being killed!!!! No!!!!!!!!)
Post a Comment
Read more

The Hidden Oracle (The Trials of Apollo Series 1) 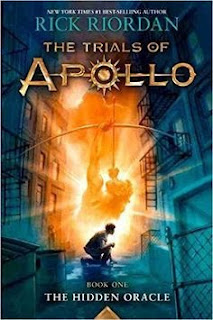 The Hidden Oracle By Rick Riordan   What’s the funniest book of 2016? Definitely The Hidden Oracle from The Trial of Apollo series!!! I laugh throughout the entire book. But is it merely a funny book? No!!! We got all those favorite ingredients we love about Percy Jackson and The Hero of Olympus!!!! What’s best? We don’t have TONS OF POV!!!!! AND I LOVE THAT!!!! (You might remember why I don’t love The Hero of Olympus as much as Percy Jackson—too many POVS and all the similar scenes.) But no! The Hidden Oracle has none of that!!! After all, Apollo is different, right? How do you punish an immortal? By making him human. After angering his father Zeus, the god Apollo is cast down from Olympus. Weak and disorientated, he lands in New York City as a regular teenage boy. Now, without his godly powers, the four-thousand-year-old deity must learn to survive in the modern world until he can somehow find a way to regain Zeus's favour. But Apollo has many enemies - gods,
Post a Comment
Read more 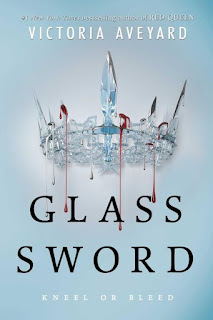 Glass Sword By Victoria Aveyard Kneel or Bleed   Oh my god!!!! I was literately screaming toward the end!!!! The ending, the plot twist!!!!! And give me back my tears!!!!!! No!!!!!! How can one of my favorite characters died!!!!!    I know there are a lot of you out there hating the first part, or the entire part of this book…but I don’t!!!! (Even though I did have some complain to do…) But, I must not deny that the second part of this book is…what? Heart-squishing!!!!!!    If there’s one thing Mare Barrow knows, it’s that she’s different. Mare Barrow’s blood is red—the color of common folk—but her Silver ability, the power to control lightning, has turned her into a weapon that the royal court tries to control. The crown calls her an impossibility, a fake, but as she makes her escape from Maven, the prince—the friend—who betrayed her, Mare uncovers something startling: she is not the only one of her kind. Pursued by Maven, now a vindictive king
Post a Comment
Read more

10 Dangerous Female Characters   In order to celebrate one of my most-anticipate books of 2016 is about to come out, let’s do this! Oh wait, you mean which book? there are so many fit for this category right? Especially now most of the female characters are dangerous…and that’s AWESOME! !!   In fact, I plan to do this long time ago, from the first time I saw some bloggers and tubers sponsored by the publisher. And I was like “damn! I’m gonna do this!!! This tag is fantastic!” So, here I am, telling you why I’m doing this tag. Yes, I know. I still haven’t told you which book, that is—The Fate of Tearling!!!! About to release at November 29, some of the readers had even get the ARC already!!!! (I’m so envy!!!!) By the way, you might wonder why using the term “character” too. Well…the reason why I choose “character” instead of “girls/women” is because…they might not be human being! Isn’t that obvious? What? You never think of this
Post a Comment
Read more 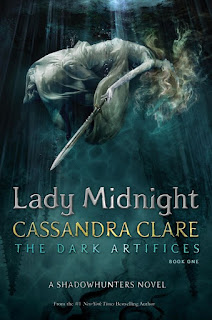 Lady Midnight By Cassandra Clare   In a kingdom by the sea   I’m finally reading this book!!! I purchased it as soon as it released without knowing anything about it. (Well…the truth is…I don’t even know there is going be another Shadowhunter series…) Because I haven’t read City of Heavenly Fire, not until this summer. So, after I devoured both The Infernal Devices and The Mortal Instruments series, I moved forward to this book. (I know it seems a bit weird that I haven’t post any review about The Mortal Instruments series…but I simply must do this first, or I’ll miss all the good thing to tell you.) Now, after reading City of Heavenly Fire and Clockwork Princess with tears washed through my face, I’ve really high expectation for Lady Midnight. But sorry to disappoint you…I’m so disappointed with this book.   Who am I kidding? I LOVE THIS BOOK!!!! EVERY SINGLE PAGE.   In a secret world where half-angel warriors are sworn to fight demons, parabatai is a sacred wo
Post a Comment
Read more

Hogwarts Book Tag   I know, I know…you’ve probably heard my confession of love toward Harry Potter series for about thousands of time…but I just can’t resist myself from the magical world!!! So…in order to celebrate the release of The Cursed Child and the three short stories at Pottermore, which is the musical edition for Harry Potter’s second child Albus Severus Potter and more magic about the Dark Age, I decide to do a Hogwarts book tag!!! Yeah!!! Since I’m a Ravenclaw…Let’s start there!  Ravenclaw     1. A Book with Blue and Bronze
Post a Comment
Read more 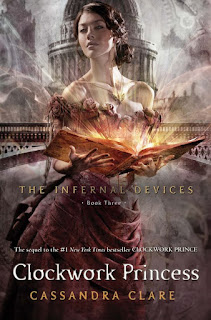 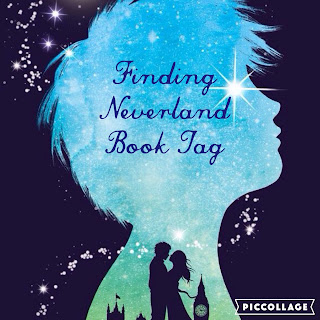 Finding Neverland Book Tag   Top one musical of all time? Finding Neverland!!!! I love this musical so much!!! Even before I went to NYC, I’ve heard the songs for thousands of time and fallen in love with the entire musical. And when I actually saw it? Tears of joy, tears of satisfaction, tears of feelings…yes, I’ll all with tears.    I’m so calm… Indeed…   And after the first time? I kept screaming whenever I saw any ads on the bus and the screen… When I knew I got the chance to watch another musical…I choose to spend all of the money on Finding Neverland!!! Again!!! And at a great great seat!   So, after I watch the musical, I decided to do a Finding Neverland book tag!!! Based on the songs and the plots!   1.       If The World Turned Upside Down—a book that change your life.   A book change my life? I don’t actually read inspiring books…not often. But that doesn’t mean that my books don’t change my life…they change me in every way, the way I think,
Post a Comment
Read more 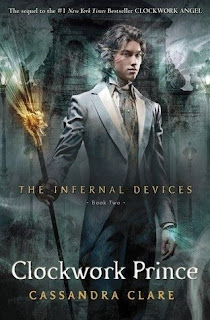 Clockwork Prince By Cassandra Clare   Oh my god…I love this series. It’s so amazing!!! It just completely blows my mind. Even though I hate love triangle…I love this one, definitely. They’re both so attractive, Will and Jem. I might not get it why everyone loves Will and Jem so much as first…but now I gradually understand. I’m doubtlessly in love with them as well. Yes, both of them. Can you blame me? I must say…it might sound horrible to you…yet to me? It’s unavoidable.   In the magical underworld of Victorian London, Tessa Gray has at least found safety with the Shadowhunters. But that safety proves fleeting when rogue forces in the Clave plot to see her protector, Charlotte, replaced as head of the Institute. If Charlotte loses her position, Tessa will be out on the street—and easy prey for the mysterious Magister, who wants to use Tessa’s powers for his own dark ends.
Post a Comment
Read more 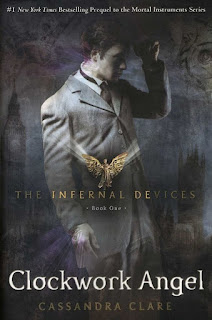 Clockwork Angel By Cassandra Clare   So…my Shadowhunter world marathon has failed. I plan to read TMI and TID series in nine day…but I stop at Clockwork Angel, and left half of it at Taiwan till I come back for New York. So now…when should you actually read The Infernal Devices? What’s the best timing? Well…since it’s the prequel to The Mortal Instruments series, it won’t hurt to read first at all. But you’ll be a bit confused at the end of Clockwork Princess. To read after finishing The Mortal Instruments series? That’ll also do…just confused with “Tessa” and “Brother Zachariah.” Oh wait! No!!! You won’t be confuse about them even you didn’t read The Infernal Devices!!! What about following the Cassandra Clare’s publish number? Well…that will be the perfect timing. Why? Because she’d already finished publishing both of the series. So…I guess no matter which way you read doesn’t matter at all!!! Just enjoy the story!!! (So you must think this large paragraph insane…I’m just g
Post a Comment
Read more
More posts