Showing posts from November, 2016
Show all

Dilemma N: Narrator (+ R: Rumpelstiltskin) W: Writer C: Cal (The Protagonist) Mag: Maggie (Mangan’s Sister) Man: Mangan (+ The British man)   N: How to become a writer? Actually, it’s not hard at all. You simply need a pen and paper, perhaps a computer as well. Just keep writing, writing, writing, writing…and yes, writing.  But, in fact, the hardest part isn’t about keep writing, instead, it’s about how to make readers feel. It’s every writer’s delight to see the readers drop their mouth and blow their mind or twist their heart. Behold, the dilemma of the writer.    [W sits in front of the table and type] W: hum…let’s see… [Typing and murmuring] Once upon a time…there live a happy king and queen. [Shake her head] No, no…definitely not. This won’t do at all. [delete the words] Now…in a faraway land. [Typing]   (The light shut up, and the music begins.) N: In a faraway land, there was a beautiful girl who lived in a tiny village. Although she ha
Post a Comment
Read more 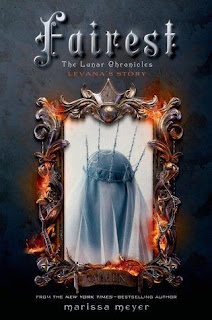 Fairest By Marissa Meyer   Oh my god!!! First, my copy of Heartless is finally here!!!!!! And it’s so gorgeous!!!! Especially the hardcover edition and cover!!! It’s one of the best book covers I’ve ever seen! However, I’m not going to talk about Heartless today, not yet…here come—Fairest!!!! It has been a long time since the last time I read The Lunar Chronicles…at least…months ago. (I’ve read so many books since then!!!) And…I know Marissa Meyer is a great author, but somehow, I forget how wonderful she is!!!! My heart twisted through Fairest, and it completely blew my mind away.      Mirror, mirror on the wall,   Who is the fairest of them all?   Pure evil has a name, hides behind a mask of deceit, and uses her "glamour" to gain power. But who is Queen Levana? Long before she crossed paths with Cinder, Scarlet, and Cress in The Lunar Chronicles, Levana lived a very different story—a story that has never been told . . . until now.
Post a Comment
Read more 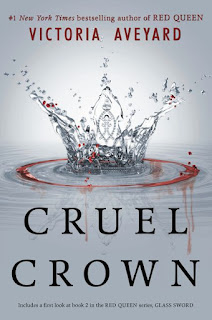 Cruel Crown By Victoria Aveyard   So…I finish the novella!!! And…it’s not…bad. Yes, not bad, but not great as well. I just don’t have a lot feeling when I’m reading…just…hum. But, not bad, at least. After all…I did finish the stories, and I did like some part of the stories too.   Two women on either side of the Silver and Red divide tell the stories no one else knows.   We get to read more about Queen Coriane and Farley!!!! (Gosh…I always mistype Farley to Feyre…they’re just so similar to me!!!!) I’m really excited to read Queen Coriane’s story…even though I was meant to be a tragic ending…and that’s really a shocking one. However…Farley…I don’t like her practically, but I don’t hate her as well…so, let’s do this!!!
Post a Comment
Read more

November 02, 2016
In their years of traveling, they also found some interesting stuff.   They found stones, special stones. Some burned like fire, some cold as ice. Some harden like earth, some smooth as the wind.   They found magical creatures. Some dangerous, some adorable. Some fearsome, some kindness.   They once stepped in a cave, there, they met a terrible dragon. The dragon destroyed all the surroundings, and within meters, no animals could survive, no plants could grow, no birds could fly.   The dragon was tall and mighty, and when it breathed, fire burned around him. He was as tall as the mountain, and as mighty as one. His skinned was as thick as bricks and as tough as stones.   It blocked the princess and the prince’s way, to keep on journey, the only way they had was to kill it.   While the prince was about to pick up his sword and fight, the princess, however, started to walk toward the dragon.   The prince shouted at her, yelling her to stay back. Yet
Post a Comment
Read more
More posts